How To Avoid The Pain Of Computer Failure

I got a message last week from a contact in LinkedIn anxiously asking for help. Their laptop had died. Well, not just died, it burned! They sent me a picture. You can see the battery at the top that has melted, and the white stuff – well that’s Fire Extinguisher power or whatever else they threw on it to make the flames stop. 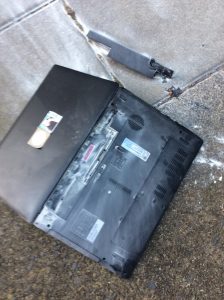 I’ve provided IT Support to this person in the past, they know what I do.
Here’s their message to me;

Hi Guy! How are you doing? Do you have anyone available to help me try and recover what’s on the hard drive of my computer? Or maybe recommend a good person to take it to? I had a new battery implode and catch on fire today …… I know, I know ….. Backups!

You notice that last line? They don’t have a backup. You can tell they know they should, but they don’t.

It Won’t Happen To Me

Why do we think that our computer won’t fail like others do? Why do we happily put all our invaluable personal keepsakes on our computer; photos, music, business, things that are important to us, and give no thought to making sure we keep them safe?
Computers last, on average, 4.6 years.
Hard drive manufacturers even rate their hard drives for failure.

This is classic denial and avoidance. We don’t want to think about the pain, so we put it off.

The problem is, when a catastrophic failure occurs the pain is even worse.

Imagine if tomorrow you came to the office and your computer was dead. Would you be okay? Would you have what you need to continue on? Or, would you be scrambling to try and get back things you now need!

This person was in pain, anxious, and was willing to now spend money to take the hard drive to a person to try and retrieve the valuable information off it, an expensive proposition! Companies do exist for this but the cost is prohibitively high, in the thousands of dollars.
In comparison a backup costs a few dollars a month, it’s easy, automatic, unobtrusive.
This person now knows failure can and does occur. 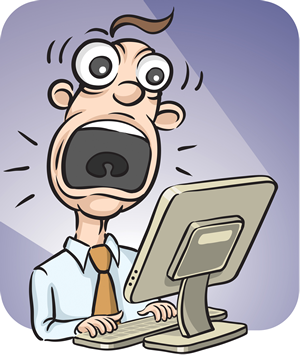 This person has suffered a failure, a potentially big failure. They were terribly worried they had lost everything on their computer. They were willing to do whatever to get it back.
You would think then that having gone through this pain they would be sure to now protect their data so as to not go through this anxiety again.

Amazingly they have not.

A new laptop, the old files are back (yes they were lucky this time) – but two weeks later no further mention of backing up that new computer.

I’m reaching out to the rest of you, you don’t want to go through something like this.

Avoid the pain. Do something about it. Be prepared. start a Cloud Backup!